Bitcoin has recently demonstrated that its price action is not only volatile, it is also very hard to predict. While it is still possible to forecast bitcoin price movements in the short-term, long term estimates often lack accuracy.

As of today, one bitcoin is worth approximately $16 500. But what should we expect from the world’s most popular cryptocurrency in the upcoming year?

As always, analysts have contradicting views. Some say bitcoin has not yet realized its full potential, their opponents tend to use the word ‘bubble’ even more often.

Dr. Julian Hosp, co-founder of the blockchain-based fintech company TenX, stated in an interview to CNBC that only one thing can be certain now and it is price volatility. Hosp said that,

He, however, remains positive about the long-term prospects of bitcoin. The most recent plunge was, according to Hosp, a perfect buying opportunity for bullish investors. The expert also added that the dip was long-awaited and healthful.

Jeffrey Kleintop, chief strategist in Charles Schwab, stated that bitcoin is a unique and independent asset class. Due to this fact it is also hard to analyze. He says that even if bitcoin is a bubble, it is still a special one:

“…I think the Bitcoin bubble if you want to call it that, is something different. If prices for Bitcoin were to plunge suddenly, because it’s so independent from the financial system, it’s kind of its own thing. It hasn’t yet become embedded in the economy and the financial structure.” 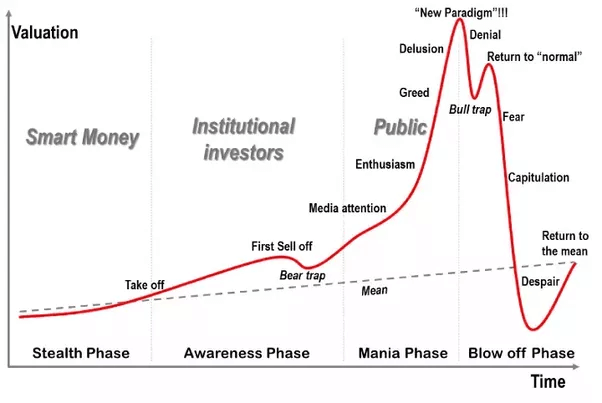 Even as a bubble BTC will be different, Kleintop says

Bitcoin was not the only cryptocurrency to be affected by the plunge. The cryptocurrency market itself lost a substantial portion of its value ($200 billion) in a matter of only two days. It was definitely not the first time for this to happen, but it also wasn’t the last.