Adam Fisher, who oversees macro investing at New York-based Soros Fund Management, got internal approval to trade virtual coins in the last few months, though he has yet to make a wager, according to people familiar with the matter. A spokesman declined to comment.

Soros, speaking at the World Economic Forum in Davos, said digital coins cannot function as actual currencies because of their volatility. But he didn’t predict the hard tumble that some observers had forecast at the time.

“As long as you have dictatorships on the rise you will have a different ending, because the rulers in those countries will turn to Bitcoin to build a nest egg abroad,” Soros, 87, said on Jan. 25.

Since the billionaire investor made his comments, Bitcoin has fallen 41 percent. The asset’s whipsaw ride over the past six months has caused some investors to doubt the value of trading it. Former hedge fund manager Mike Novogratz shelved plans to launch a crypto fund in December, shifting his efforts to a merchant bank focused on cryptocurrencies and ventures based on related technologies. 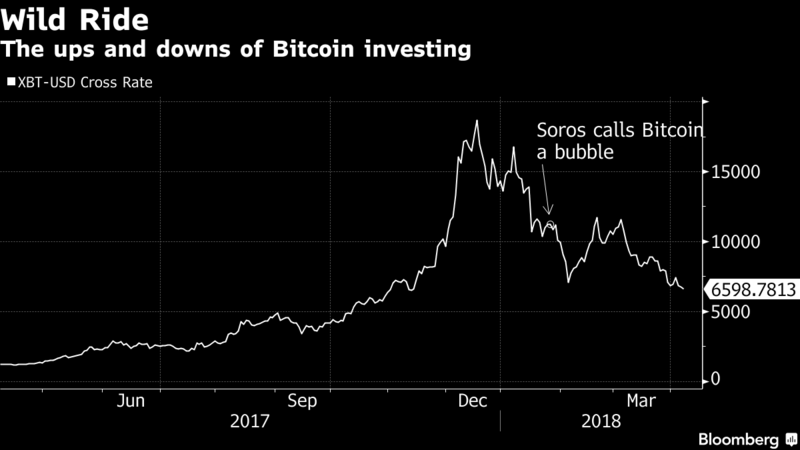 Other macro managers have turned to digital coins as profits from their hedge funds dwindle. John Burbank, who shuttered his main fund last year, plans to raise $150 million for two funds investing in digital currencies. His Passport Capital started the funds in January and have mostly sought investments from family offices and other wealthy investors.

Billionaire Alan Howard made sizable personal wagers — separate from his firm — in cryptocurrencies last year and plans to put more of his own money into digital assets and the blockchain technology behind them.

Soros has already been indirectly betting on crypto. The firm amassed a stake in Overstock.com in the fourth quarter, making it the third-biggest shareholder of the discount e-commerce company. In August 2017 it became the first major retailer to accept digital currencies. The company had also planned to start an exchange for cryptocurrencies as well as offer digital coins that could trade on the platform.

In March, Overstock.com disclosed that the Securities and Exchange Commission is investigating its proposed ICO. Shares have sunk about 40 percent in the wake of the disclosure.

Investors in digital assets also face the growing possibility of government intervention. Central banks globally are investigating the benefits and risks of cryptocurrencies, while regulators in South Korea, one of the world’s busiest Bitcoin markets, are cracking down on such trading amid allegations of fraud.